Trhuebab – Healing Power Of Water Purified By The Light Of Rishi

Rays emitted from the Rishi star is said to have the power to cleanse water of impurities, pathogen and toxicity. Karma Phuntsho is a social thinker and worker, the President of the Loden Foundation and the author of many books and articles including The History of Bhutan.

The Trhuebab (ཁྲུས་བབ་) festival is an important cultural event in Bhutan, observed mainly in the eastern districts. It literally means the descent (བབ་) of blessed water (ཁྲུས་) and refers to the blessings which fall on the waters on earth.

However, Trhuebab is neither a celebration of the rainy season nor of the end of it. In fact, there is no direct link to rain.

Thus, the current rendering of Trhuebab as ‘Blessed Rainy Day’ in English is a wrong translation.

A local folk belief explains Trhuebab as the time when the water completes a full cycle and reaches the water sources.

However, learned astrologers provide a much more sophisticated explanation of the significance of the event.

According to Bhutanese astrologers, the sun enters the domain of Virgo in the 8th Bhutanese month for a week and directly shines on the star Rishi (དྲང་སྲོང་) which is identified with Canopus.

In Hindu folklore, Agastya is known as the sage who drank the seas and has the power to make rain and bless water.

Bhutanese astrologers, like other Himalayan astrologers, explain that the star Rishi is formed from crystals (ཆུ་ཤེལ་) and ketaka (ཀེ་ཏ་ཀ་) gemstone which has the power to purify water. Thus, it is called the medicinal star.

The rays emitting from the star is said to have the power to cleanse water of impurities, pathogen and toxicity. This is why the Sowa Rigpa medical tradition recommends using the water touched by the rays of the star of Rishi in order to treat diseases and enhance one’s health and vitality.

Sangay Gyamtsho, one of the foremost authorities of Sowa Rigpa wrote in his book entitled Blue Beryl: “Drink the water  cleansed  day  and  night  and rendered  poisonless  by  the  shining  Rishi.”

Such belief is also common among Himalayan people as the following Tibetan folk proverb suggests: “The star Rishi is shining; there is no need for doctors (སྐར་མ་རི་བྱི་ཤར་སྲོང་།།སྨན་པའི་དགོས་པ་མི་འདུག།).”

People put water in containers and place them outside to receive the light of the star and then use it for drinking and bathing, or they could choose to bathe in open streams and ponds.

Some Buddhist followers further enhanced the belief in the healing power of the water during Trhuebab by adding another layer of Buddhist explanation to this Indian astrological theory.

In the sacred mountains around Mt Meru, the gods, divinities and saints of yore were said to   have created a statue of Buddha Vairocana with numerous precious stones.

The crown of the Buddha Vairocana is said to have been made of the same materials of crystal and ketaka gem which form the star Rishi.

When the star Rishi shines above Buddha for a week, drops of divine nectar are said to dribble down due to the prayers of the gods, divinities and saints of the past.

These drops of celestial nectar then imbue the streams and rivers of the world with healing power and blessings. Thus, people drink and bathe in the waters during the week.

What do people do during Trhuebab?

Whatever the reasons for the power and blessings invested in the waters of the world, Trhuebab is observed in Bhutan and other parts of the Himalayas as a bathing and cleansing festival.

Astrologers calculate the exact time when the sun enters the space to shine on Rishi and following the calculations, people wake up before daybreak to take showers and wash their clothes. 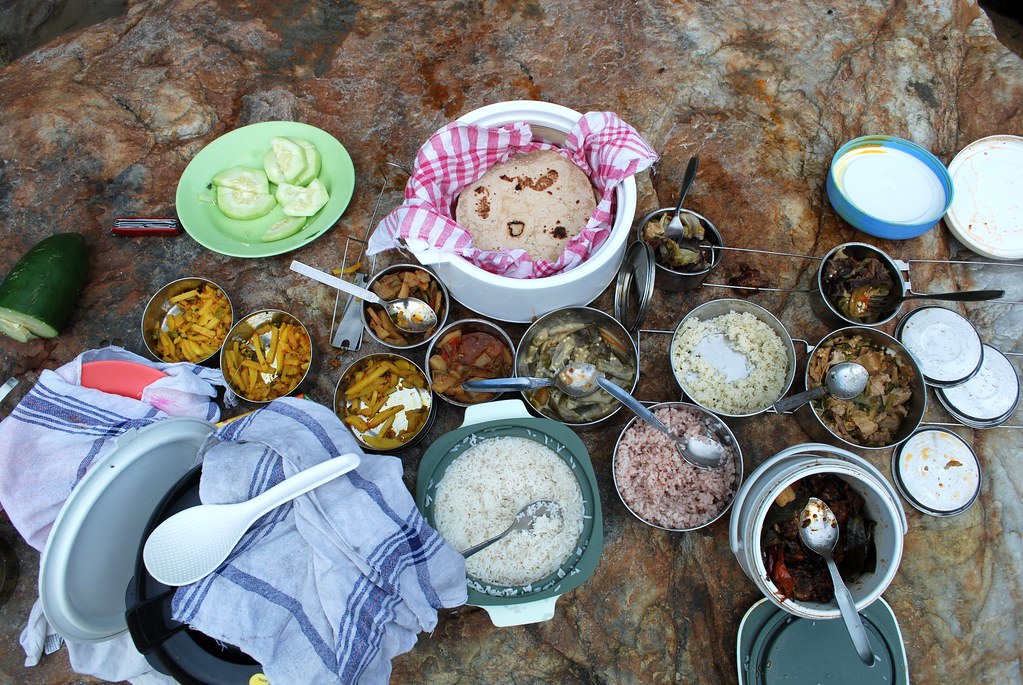 Bhutanese food seen during a picnic on Trhuebab.

They also go out to the streams and ponds to wash and have picnic feasts. In old Tibet, the Dalai Lama and his court would observe this event with long bathing sessions and feasts.

In eastern Bhutan, Trhuebab is a very important occasion for family to get together and party.

The first day is often spent with immediate family members and men often play games in the subsequent days.

Due to its significance and popularity, Trhuebab was reinstated as a public holiday in Bhutan after it was once controversially removed from the list some years ago.

Trhuebab - the Descent of Blessed Water

The Trhuebab (ཁྲུས་བབ་) festival is an important cultural event in Bhutan, observed mainly in the eastern districts. It...

Also known as the ‘Blessed Rainy Day’ in Bhutan, it is a holiday which marks the end of the monsoon season.